Albany-area history: Isaac Truax and his Tavern of Death

In doing my morning news scans, and subsequent googling and wikipedia'g (does that make me a wikidemic? I'm definitely a googlist.) of various items of interest, I came to learn of one Isaac Truax.

Some of the more interesting bits about Isaac revolve around his tavern, located near his burial ground. 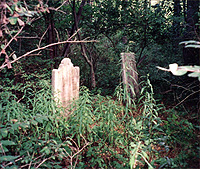 Apparently Isaac had a tavern along the old King's Highway between Albany and Schenectady. This ran through the Pine Bush, which was, to some extent, not unlike the sort of rugged terrain gunmen of the Wild West would hide out in a century or so later, across the continent. Guests were rumored to have disappeared at Isaac's tavern. Recent excavations discovered human remains in the basement.

I love the history of this area.
Posted by Andrew Badera at 6:32 AM

been there a few times. one part of the old kings road footpath still exists. go to the corner on kings rd and old state. its between there and rt 155.

nice -- I live pretty much around the corner, definitely going to have to take the dog over for a look.