One of my cats is missing :(

My friend of some eight years, Ellie, a female tortoiseshell American shorthair, decided to take a trip outside last week. She'd darted out a few times since we moved, and apparently she did so without me noticing for once. She was last seen on Wednesday, June 1st, in a yard just next door; unfortunately one of the residents let their giant Schnauzers out, who chased my cat out of their yard in the direction away from my own. 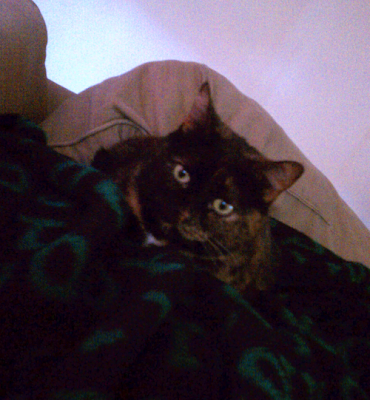 I've handed out and placed in neighborhood mailboxes some three dozen flyers, contacted animal control, cat rescue, local vets, walked the block or greater neighborhood at dawn or dusk a few times, put out food, treats, tuna, my worn clothes. No sign of her so far. I'm holding out hope however.

Ellie is the first pet who was ever 100% mine; I saved her from being euthanized due to being too young/too small to care for in a shelter at the age of ~3 weeks or so, after my good friend (and recent Dad! congrats again!) Aldwin Maloto rescued her on a hot day, abandoned in the parking lot outside his aparmtent.

She's my #1 buddy and has never shown as much pleasure and comfort as the times she's curled up in my arms, on my chest -- not a people cat. I've had her a year and a half or two longer than my other cat, Dagwood, and I've had her quite a bit longer than my dog, Nick. She's been with me through six moves; three apartments, three houses, three cities, two states. She's been with me in some of my near-worst times, and some of my best times.

She's a bit of a scaredy cat, not particularly amicable toward people she doesn't know. She's probably hiding under someone's deck or in someone's shed right now. I really hope she hasn't been hit by a car or had something else violent happen to her ... and I fear that if she hasn't been hurt, that she'd never be comfortable and happy in another home. Maybe that's partially ego ... I don't know, but in the end, I just want her home again, but if that can't be, I just hope she's safe and happy.
Posted by Andrew Badera at 7:38 PM